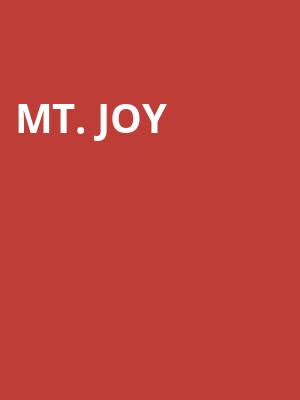 Indie rockers Mt. Joy hit the road as they present their debut self-titled album! Released in 2019, Mt. Joy saw the five-piece go from a relatively unknown alt-rock group to late night TV staples and racking up millions of Spotify plays.

Highschool buddies Matt Quinn and Sam Cooper reunited in 2016 and released single "Astrovan". The single's rapid rise of success drew the attention of Michael Byrnes, Sotiris Eliopoulos and Jackie Miclau to the group. Now a strong five-piece Mt. Joy hit the festival circuit before releasing their debut album in 2018.

As one of the US' most exciting new Indie bands, don't miss your chance to see Mt. Joy live!

Please note that some venues are age restricted, please check with the venue before purchasing tickets.

You may be required to have had a COVID vaccine in order to attend this performance or show proof of a negative test. Please contact the venue directly for more information on this.

Sound good to you? Share this page on social media and let your friends know about Mt. Joy at College Street Music Hall.